Why Flowers are Good for Your Health

Many people would agree that the mere sight of flowers makes one feel happy. A new mum is often surrounded by hospital flowers, and some cooks use edible or cooking flowers to add a little colour to favorite dishes. It’s easy to send flowers online for a special occasion. But flowers for health? Well, it seems there is now scientific agreement that flowers can affect mood and even speed the healing process.

Simply looking at or smelling flowers can cause the release of substances in your brain called endorphins. Endorphins are called “feel good” chemicals because they decrease your stress levels, induce a feeling of well-being and suppress pain. Researchers at the Virginia Polytechnic Institute found that flowers improve communication, decrease mental fatigue and enhance self-esteem. A study at Texas A&M University showed that people in an office with fresh flowers and plants were more productive than those who worked in offices with decorative sculptures or no decorative embellishments. Innovation and creative problem solving also improved for workers in flower-decorated areas. 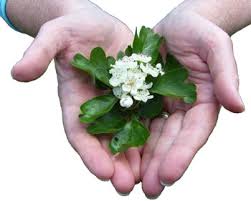 People given flowers for health heal better. A study in a hospital in Kansas, a Midwestern state in the U.S., found that patients who were in hospital for gallbladder surgery recovered better in rooms that contained plants and flowers. Patients who had hospital flowers were found to report decreased pain, fatigue and anxiety; they also had lower blood pressure readings and needed less pain medication. The most extensive study, by American Jeanette Haviland-Jones, of Rutgers University in New Jersey, found that women who received flowers smiled more and reported positive moods up to three days later. Both men and women who were given a flower – as opposed to a pen or nothing – smiled more, talked more and stood more closely to other people. Elderly people who lived in a retirement home reported more positive moods and had improved memory after bouquets were delivered to them.

Cooking flowers can be garnishes or they can be eaten along with the meal. Nasturtiums, borage, pansies, violets and roses are edible flowers that add colour and taste wonderful in salads. Calendulas have a flavor similar to saffron, although it is not quite as strong. Borage blossoms or violets can be frozen in ice rings or ice cubes to add beauty to your punch bowl. Edible flowers can also be used to flavor oils, vinegars, jellies and marmalades, or crystalized with sugar to decorate cakes. If they aren’t readily available in the local shops, you can order crystalized flowers online. Just remember, not all flowers are edible – don’t put it on a plate unless it is – and some people with respiratory problems such as asthma may have an allergic reaction to flowers.

Besides providing you with interesting content, we're focused on enabling you to order flowers online for your loved ones worldwide. The quickest way to show you care.

Show It With an Arrangement of Flowers

How You Can Keep Your Flowers Live Longer

Flora – the Roman Goddess of Flowers and Spring