Mother Nature has an extraordinary way of impressing us. These beautiful but strange-looking orchids, for example, are way too amazing to believe they ever exist. But they do exist, and it’s high-time you get to know them. After all, you don’t want to miss half of your life.

Duck Orchid also called Caleana looks like a duck raising its wings to fly. Its lip, particularly, perfectly resembles that of a duck’s beak. The orchid’s colour is commonly reddish brown, but in rare cases, it can greenish with some dark spots. It also has a single leaf near its base’s stalk. Caleana can be found in Queensland to South Australia, as well as in  Tasmania.

Dove orchid, also known as Peristeria, is commonly found in South America, Costa Rica, Panama, and  Trinidad. When you look inside its pure white flower, it will reveal a hidden structure inside which seems like a dove sitting cosily at the centre of the petals. The tiny dove has raised wings, some small pink dots, and a little yellow beak. This structure is the reason behind its name. It is indeed one very peaceful looking flower.

The Naked Man Orchid, also known as the Orchis Italica, and is often referred to as the Italian orchid, owes its name to its Mediterranean origin where it grows in huge numbers. It is also called as such because of its petals that look amazingly like naked men. Its colour is a densely clustered combination of bright pink and white. The orchid’s strangely shaped flowers make it quite famous. 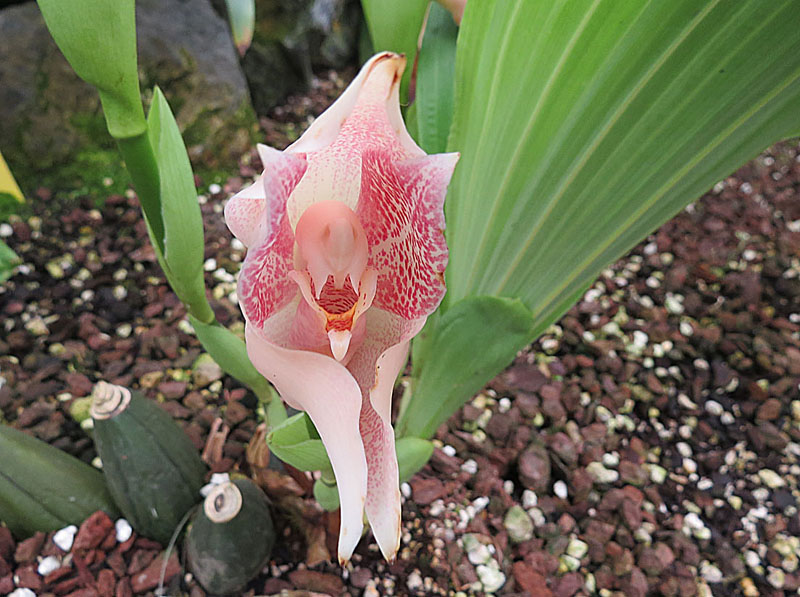 The swaddled babies or the Angloua Uniflora is a beautiful orchid that grows in Columbian Andes. It’s most impressive feature is its enormous, creamy-white, and waxy flowers. It has quite a complex structure that at its particular opening stage, it starts to look like a tiny baby with a swaddling cloth wrapped around it.

The White Egret Orchid is also called as Pecteilis Radiata, Fringed Orchid or Sagiso. It is a native Asian beautiful orchid with stunning pearly white petals that bloom in summer. Its flower looks like a flying egret bird covered with snow,  and it has petals that look like a bird tail. Its flower’s width is 4 cm, and it has nectary that can grow up to 8 cm in length.

Dancing Lady also known as oncidium is named after its distinct shape. Its little top part and huge lip resemble that of a lady dancing in a yellow gown.  This orchid grows in the tropics and the subtropics of Central America, Mexico, and South America. It is available all year round and comes in various colours such as white, yellow, pink and red.

The bumblebee orchid, also known as Ophrys Bombyliflora, grows in the Islands of Canary, in Turkey and Lebanon. Its broad sepals, little bronze-coloured petals and a brownish lip resemble an attractive female bee which makes it a female pollinator.

Did you know that largest and premier orchid show in the Southern Hemisphere is in Melbourne? It’s called The Melbourne Orchid Spectacular. There is indeed a lot of spectacular flowers in Melbourne, and the strange yet beautiful orchids are only one of them. Plus, orchids do very well in flower arrangements. See it for yourself here.

Do you want to add more to this list? Drop it in the comments below.

Besides providing you with interesting content, we're focused on enabling you to order flowers online for your loved ones worldwide. The quickest way to show you care.